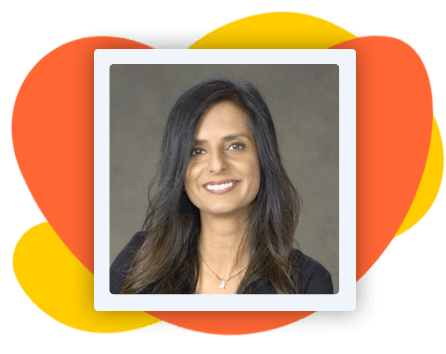 Sangita has over 20 years of experience within the publishing, technology, and start-up environments.

She is active in her mission to inspire the next generation of kids to be curious, engaged, and life-long learners.

Sangita Patel began working with LeVar Burton and Reading Rainbow in 2010 and was instrumental in building its award winning Skybrary platform. There, she negotiated and contracted with over 25 publishers to bring their high-quality children’s books into Skybrary, distributed Skybrary’s original video content to education partners, and ultimately grew the platform to where it is today.

She previously held the titles of Vice President of Publishing and Chief Operating Officer at the company during which time she launched and managed a record-breaking $6.5 Million Kickstarter campaign and published LeVar Burton’s first children’s book, The Rhino Who Swallowed a Storm, which sold out of its initial 25,000 copy print run.

In 2016, Sangita was promoted to the role of Chief Executive Officer, at which time she rebranded the company, settled an ongoing complex legal situation, cut operating costs by over 85%, and pursued opportunities to find Skybrary a new home. In February 2019, Reading is Fundamental acquired both the Skybrary platform and its team. Sangita continues to work with LeVar Burton on his new production company LVB Productions.

Prior to LeVar Burton Kids, Sangita was Director of Business Development at Libre Digital, a publishing company enabling content providers to digitize their content. She was also a founding member of Dow Jones Ventures’ start-up FINS, a financial career portal at The Wall Street Journal. Sangita spent the previous 8 years at WetFeet (acquired by Universum), a Silicon Valley start-up where she was the Head of Sales and Business Development, accounting personally for over 25% of the company’s annual revenues.

Sangita obtained her Juris Doctorate from The University of Illinois at Chicago’s John Marshall Law School and her Bachelor of Arts in International Studies from Old Dominion University in Virginia. Sangita calls Lake Forest her home where she has resided for the last 10 years.

Whether its books, podcasts, newspapers, or television, Sangita spends much of her free time learning from inspiring storytellers. Her purpose and intent is to pass on this joy of learning not only to her two nieces but to all children with the directive that everyone has the right to literacy.

Meet the other Advisory Board members