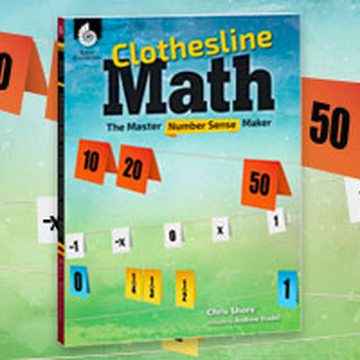 Clothesline Math is nicknamed the master number sense maker because it requires students to think harder about quantities while simultaneously making it easier to see their relationships to each other.

To create this tool in your classroom, simply hang a long string—like a clothesline—somewhere that all students can see and interact easily with. The numbers for the clothesline are created by folding paper or index cards in half and writing the numbers on the front. They can be integers, fractions, decimals, variables—the sky is the limit.

The value of this tool comes from the discussion and the interaction that students have as a result of working with the numbers on the open number line. For example, when learning place value, students often have difficulty understanding that the digit of ‘1’ represents different quantities depending on its place as in 1, 10, and 100. However, the students may understanding that 100 is greater than 10 which is greater than 1, but they often do not understand that each one is ten times the other. This very important concept can be revealed by having them work through the proper placement of these three quantities on an open number line.

But basic numeracy isn’t all that can be done with clothesline math. Representing relationships between quantities is the essence of algebra. For example, in the context of a class of 20 students, the relationships of the number of boys, b, and girls, g, can be represented by b + g = 20. Writing the relationship and seeing it are two different cognitive demands.  By placing one of the variables and having students place the other reinforces the concept that b and g vary, thus, they are called variables. These variables, however, have a very specific relationship.

The sense making also comes from students being able to wrestle with their own errors as well as the mistakes of others. Look at the following student sample of the initial placement of the three most basic fractions.

By asking students to support or challenge the placement of these fractions, the collective reasoning of the class leads to the following correction of the order of the fractions.

At this point, the students will argue over the placement of the one-third, whether it is closer to the one-fourth or the one-half. These arguments can be supported through multiple methods: common denominators, proportional reasoning, or decimal conversion.

Having students grapple with the misplacements is far more engaging, and thus, far more effective for student learning of any numerical topic. So go to your garage and find some string or twine or rope and build your own clothesline in your classroom. You will be amazed at the learning that takes place! 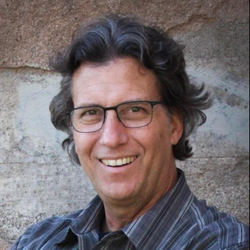 Chris Shore currently serves as a math coach for Temecula Valley Unified School District in California. He is responsible for implementing the Common Core State Standards for a high school and two middle schools, and oversees their Professional Learning Communities. As an educator, Mr. Shore has taught in various capacities over the course of his 25-year career. Mr. Shore is the founder and editor in chief of The Math Projects Journal and the co-founder of SQeW Concepts. He has received the Presidential Award for Excellence in Mathematics and Science Teaching as well as Outstanding Teacher Award for Riverside County.