Native American Heritage Month November has been designated Native American Heritage Month, and what a great opportunity to delve into the richness of American Indian history and cultures with all students! But should we stop with history? Cherokee historian Karen Coody Cooper offers educators some excellent insights in bringing the reality of American Indians as contemporary people into students' awareness as well.

While it is important for children to learn about American Indian culture and history, it is probably more important for students to learn that American Indians exist today as contemporary people. I am Cherokee, museum education was my career, and I once was invited to speak to a kindergarten class in an area seemingly bereft of American Indians. As the children filed into the room where I was to speak, one child was dragged into the room screeching in terror. A school assistant told me the boy was terrified about being with an American Indian. It was a traumatic day for both of us. I was abashed at his terror and he was scared witless. As I proceeded through the program and he learned that I (a motherly "normal" person) was the American Indian, he became calm, but I am sure he was very conflicted about what he "knew" and what he was observing.

A Look Inside Children's Books

There are still children's books that employ Indians as a negative foil to bolster sympathetic feelings for colonists. We are the "other" allowing the settler and explorer to be understood as heroic. Examine the books in your school library. Make sure there are plenty of books that portray American Indians as contemporary people, and discourage books that employ the Indian as savage aggressor. Robert Louis Stevenson's A Child's Garden of Verse portrays American Indians as simpletons, or strange. Generally, the older the book, the worse it might be regarding portrayals of American Indians.

Try to find images of contemporary American Indian people in modern jobs. The best images would use uniforms to help children transfer ingrained images of past Indians into contemporary Indians of soldiers, police officers, medical professionals, airline pilots and stewards, ballet dancers, cowboys, academics, judges, firemen, and fast food employees. The National Museum of the American Indian Education Department can advise teachers about appropriate books and educational materials. Ask your students what they know about American Indians, and ask them what they would like to know about American Indians. Perhaps they would be interested in American Indian food, crafts, or words. Your state may have towns and rivers derived from Native language. Start a discussion about American Indians and let the children lead the way. The conversation needs to happen at a young age to successfully repudiate errant information and to encourage positive interest about our nation's original inhabitants. 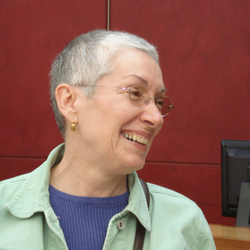 Karen Coody Cooper is a Cherokee Nation citizen, born in Tulsa, Oklahoma. She is retired from a museum career at the National Museum of the American Indian, Washington DC, and returned home to work for the Cherokee Heritage Center in Tahlequah, OK. She is the author of Spirited Encounters: American Indians Protest Museum Policies and Practices, Alta Mira Press.